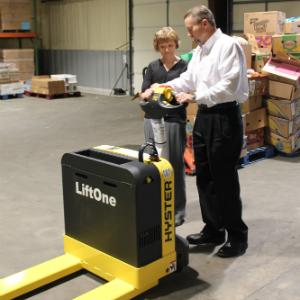 Savannah, G.A. (January 14, 2015) – Following an initial donation in December, LiftOne has announced that it will donate a second Hyster® W40Z walkie pallet truck to America’s Second Harvest of Coastal Georgia. The subsequent donation occurs in conjunction with LiftOne’s booth at the 2015 Southeast Regional Food & Vegetable Conference in Savannah.

“It is our pleasure to provide these pallet trucks to an organization that contributes so much to our community,” said Gary Page with LiftOne in Savannah. “We are extremely grateful for everyone who visited during the conference, spurring the need for us to provide Second Harvest an additional piece of equipment. The Hyster W40Z walkie pallet truck is ideally suited for Second Harvest’s operation, and our hope is that this new equipment will help to increase productivity in their facility—getting more food out quickly to those in need.”

The first Hyster W40Z walkie pallet truck was donated after LiftOne representatives worked with Second Harvest in redesigning a pallet rack layout and noticed their employees were struggling with manual pallet jacks as they unloaded trailers filled with food donations. The newly donated W40Z walkie motorized hand pallet trucks offer exceptional maneuverability and productivity. The model’s standard creep speed feature allows the truck to operate with the handle in the full upright position—placing operators closer to loads for better visibility. Additionally, fingertip control of all truck functions with either hand aids steering and pallet positioning in tight spots.

The non-perishable goods collected will be distributed by Second Harvest to more than 300 nonprofit agencies in a 21 county service delivery area that includes both urban and rural communities in coastal Georgia. Their partner agencies include food pantries, homeless shelters, soup kitchens, domestic abuse facilities, senior centers and daycare centers for low-income children.

About LiftOne
Headquartered in Charlotte, North Carolina, LiftOne LLC (www.liftone.net) is a full-service material handling dealership with branch locations in North Carolina, South Carolina, Alabama, Georgia, and Tennessee.  Since 1926, LiftOne has been committed to being our customers’ trusted partner by offering the highest levels of support and services.  LiftOne offers a wide range of lift trucks; from pallet jacks to 115,000-lb container handlers, specialty equipment such as Ottawa trailer spotters, Linkbelt cranes and Rail King rail car movers as well as the related aftermarket services to keep those products moving quickly, smoothly, and safely throughout the supply chain.  As a recipient of Hyster Company Dealer of Distinction, MHEDA’s Most Valuable Partner and Ottawa Premier Partner awards, LiftOne has been recognized as achieving the highest standards for its customers and manufacturing partners.

LiftOne is proud to be a part of the CTE family of companies.
A TRUSTED PARTNER IN YOUR SUCCESS.
cte1926.com